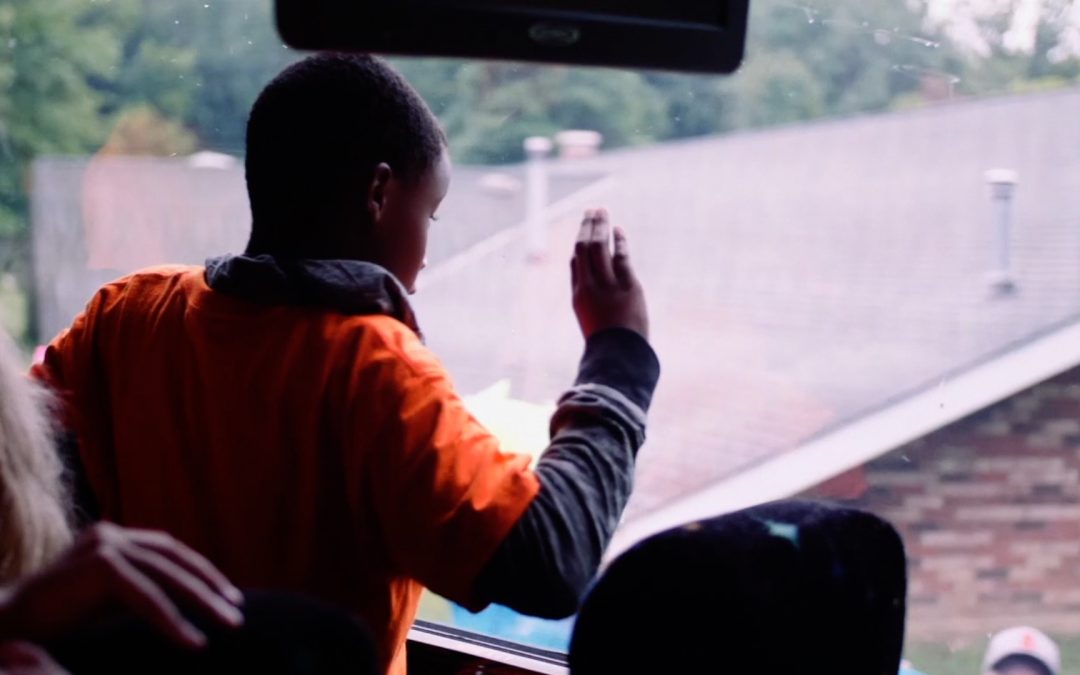 On Friday, we said “Goodbye.”

Goodbye to the Royal Family Kids Campers. They were “our” kids for a few days, then we released them back into their normal everyday lives. But they come home different and so did we.

This week wore me out. Everyday started at 4am to edit the daily video before the kids woke up at 7, then from that moment on, I was engaged with the kids and telling their stories until we fell asleep. One of the campers, let’s call him Jimmy, was there for his first time. My initial memory of Jimmy was of him screaming hysterically because it wasn’t his turn yet for archery. So my first impression of him was “Jimmy’s going to be trouble.”

If something didn’t go his way, he would respond by throwing a punch or running away. Typically, I never get involved in managing children’s behavior when doing camp videos but at RFKC, it was all hands on deck. If I saw Jimmy take off running, I’d go after him too. Then at bedtime, his anger from the day turned into fear. Instead of screaming he wept, only to be comforted by the presence of a volunteer standing by his bunk. Bedtime was always rough for Jimmy so as a way of “guiding” him to sleep, he was walked to every boy’s bed to hug them goodnight.

It’s tempting to categorized kids (or adults) who irritate you as “bad”. It gives you an excuse to write them off and love them less. But then they do something sweet like hugging everyone in the room which throws your whole perception of them off. And even if Jimmy didn’t do a single kind thing during the entire week, he was still owed the same grace we’ve been shown in our own lives.

Royal Family Kids Camp exists to love abused and neglected children. I don’t know Jimmy’s story, but he has a past which justifies him attending our camp. If I had not been raised in a loving home, gone without food or clothes, or only shown attention when a parent wanted someone to express their anger or sick desires onto, I’d be angry and scared as well.

Jimmy is the way he is because he’s been the victim of a fallen world, riddled with death and destruction. By the grace of God, love has been shown to him and he’s learning how to reflect this onto others too. We all have been victimized by life on this side of eternity. Don’t get me wrong, there are blessings in this life but ultimately, this world is not our home. Stories like those of the RFK campers remind me of this truth. Thankfully, we have a God who is remaking creation back into how it was meant to be: a world where we can be free of evil things such as abuse and neglect.

While I’m used to living in this fallen world, I’m not okay with it. One day the redemption process will be complete. In the meantime, those who have been redeemed are privilege to take part in ushering in this new world. This is our place in the grand story, the one where God is the hero and we are the ones who need saving.

There’s no shortage of evil to fight whether it be abuse and neglect or beyond. My hope is all of you would find a way which you can help remake the world. If you know your calling, live it out to its fullest. If you don’t have your purpose quite figured out, try stuff until you do. The latter was where I was for the longest time. Now, I’m telling the stories of others while trying to write a beautiful tale with my own life. And I’m going to keep doing this until I’m called “home”.

Just find your fight and do the same.